emotional folk with an elliot smith-esque vibe from rural ohio's jonathan bellis. fragile but pretty vocals, distant distorted fuzz, stabbing pianos and an instistently plucked acoustic guitar. it's a cup of tea and rain tune, but a good one.


buy the album for just a buck. observe below a live performance of another song from this album, called 'colorblind'.

'demons' is the first available track from 'in transit', the latest release by austin via new england singer/songwriter jake sorgen. an interesting tune with story/conversation lyrics reminiscent of paul simon. as the verse goes on, voices from the side speakers begin to recite the lyrics simultaneously, but with different attitudes and demeanors, lending a psychedelic atmosphere that swirls into a type of crescendo, blending with an electric guitar. these ambient touches overlay a cleanly fingerpicked guitar style.

check out some of jake's older tunes on his soundcloud and on his website. 'in transit' will be available september 3rd.
Labels: austin, experimental, folk, jazz, singer/songwriter

here is a pretty unsettling soundscape of manipulated found sounds and bird songs by staunton, virginia multi media artist angus carter. i posted some of his videos here before.

dizzy bats - batman and the joker

NYC folk/rock trio the dizzy bats combine the driving catchiness of pop punk with the acoustic guitars and swelling horn laden choruses of the nu-folk sonic descendants of neutral milk hotel such as the decemberists. erudite lyrics and a chorus that takes you along in the undertow of its heavy, nearly orchestral momentum are the calling cards of their newest tune.

here is the official music video for the reggae-tinged "please stall" from their previous recording efforts.

the concept of buttons - wake the dragon

i don't have any background info on this short folkish lofi song, the link was simply left as a message on MFOA's FB wall. a link transmitted this way would go straight into most music blogger's garbage. but this is MFOA, so here it is! the singing reminds me of a beginners combination of bob pollard and michael stipe.

you could go to the soundcloud page, but this is all that's there.
Labels: bedroom recording, folk, lofi, loner folk, singer/songwriter

the james badfellows - do my dance

i'm happy to present the newest cut of demented garage soul from VA's the james badfellows this morning right here on MFOA. recorded at minimum wage studios in richmond, this song builds on the sonic demolition of the JBF demo 'a blaze in the northern soul' with high fidelity scumminess, sleaziness and distrust. cold soul crooning, like that of an undead voodoo roy orbison demands that you thrust with james to the swinging sounds of two guitars, drums and bass, then you'll fuck every dracula that's in your dreams.


if you live in VA you can probably catch the james badfellows playing every once in awhile. otherwise find out more here. look for more new songs to be debuted on MFOA in the near future.
Labels: harrisonburg, punk, rock, soul, staunton, the james badfellows, virginia

i just added a new page to MFOA in the form of the MFOA download archive. this page contains all of my music (or stuff i've been involved with) that i have featured here over over the course of MFOA's existence, as well as a lot of older stuff that isn't available elsewhere. somewhat personal, somewhat self indulgent, but hey, there it is. check it out if you were ever a fan of the brooms, dirtpond, tomsmen, or JLB.
Labels: bedroom recording, dirtpond, lofi, moss, the brooms, the modern folk music of america, tomsmen

talley summerlin - shake the gates unplugged in the woods (video)

the title of this post says it all, MFOA readers are probably familiar with the work of mr. summerlin.

MFOA has been hopping lately, i have been happy to feature all sorts of great musicians and songwriters from many different genres of music and various levels of fidelity. i'm so pumped about the stuff folks are sending me, or that i'm finding, and the folks stopping by here to listen and discover these artists, i decided to break off a slice for you all in the form of the MFOA summer 'dog da(ze)ys' mixtape. 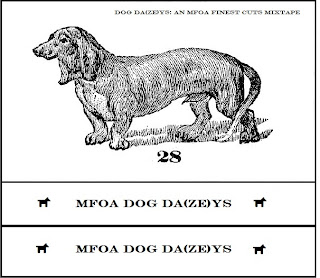 this mix is a hot weather cool down of home made tunes, rock, psych, folk, roots, old time, rap and more. i am especially excited about the closing song on the mix, 'this is my folk' by san fransisco's satellite high...he recorded it just for MFOA and the dog da(ze)ys (thanks buddy!).

thanks to all the musicians who have been contributing and to everyone who has been coming through to bear witness to all these tunes!

enjoy these summer sounds in the dog days.

sonic graffiti out of st. petersburg, florida deliver a wild, loud blast of rock that's reminiscent mainly of the MC5...a good rhythm section, persuasive singing and gonzo guitars and psych/blues riffs that do recall the work of brother wayne kramer and sonic smith. this brief EP is a full on assault, but it leaves you feeling like you might not mind being assaulted for a little longer.


a lyric i noticed was 'i'm a weirdo, i'm a creep, my own leader, my own sheep'. i get the feeling sonic graffiti would be a fun band to catch live. learn more about them, including album releases and show dates, here and here.
Labels: blues, florida, heavy rock, psychedelic, rock

happy to present this moody, riff heavy track from south florida's los demolirs. mixing the sounds of grunge and garage rock with the sun dazed vibes of the beach, the tune starts out with a memorable bass figure and some spaced out 'whoas', before launching into the tried and true loud-quiet-loud dynamic that has worked so well for rock bands in the past...and is still working for los demolirs.


this track represents a taste of the upcoming LP that los demolirs have in the works, so look for that in the future. in the meantime, find updates and show info here.
Labels: florida, grunge, heavy rock, pop, rock

i have been waiting for an mp3 of this super catchy number from harrisonburg, va's dead professional since i heard it blasting out of neil's basement a few years ago in the cinnamon band days. this song boasts a high caliber melody and a youthful power-pop urgency. you like the stuff on yellow pills: prefill? you'll like this. listen to it and love it.

john has been all over the place lately, scheduled to open for the likes of kurt vile and bobby bare jr. find out these show dates and more about dead professional right here.
Labels: bedroom recording, harrisonburg, one man band, pop, power pop, rock, the cinnamon band, virginia

new psychedelic summer dog day jams of the first order from portland's au dunes. a band that truly celebrates the whole catalogs of nuggets-era morning glory seed luminaries like the troggs and the seeds and the electric prunes, the chocolate watch band, all of the deep tracks, any DJ. this is a tape release on curly cassettes, also available as a $5 download. probably if you find these guys (and girl) at one of their shows you could talk them out of a free tape. sort of sounds like if you could get quaaludes  over the counter and a warped everly brothers 45 with your PBR and tecate and cigarettes at the 7-11 on hawthorne.


look for these guys playing and touring up around the weediest parts of the west coast and rocking the henry miller library in the near future. get your morning glory seeds ready.
Labels: curly cassettes, lofi, oregon, pop, portland, psych folk, psychedelic, rock, tape

fractious and fractured crazed one man band noise pop-rocks from the mind of charlottesville, VA's thomas dean, the prolific and long-labouring man behind order [of the dying orchid?]. i just discovered his soundcloud and i thought i would share some of these songs with you. lots of distorted keyboards, pounding drum machines, and strange incantations.

this is the stuff thomas dean gets down in his kitchen...look for him on the road and stage playing with the estimable psych/power pop outfit the invisible hand.

here is a music video for cobra pt. II

a new z-bar jam fresh off the presses in the form of this folksy love-ish tune called shake run.

i gather the performance also involves some costumes, lights, etc. a holistic experience.

i wish i could say where to look for more music, performance dates and information, but i wouldn't know where to point you aside from here.
Labels: ambient, electronic music, experimental, florida, live, live recording, performance, psychedelic

this is an album makes a great post for MFOA, an album of songs written by the man known as "the father of american music", stephen foster, composer of such indellible american tunes as camptown races and oh susanna, and a main purveyor and songwriter of the minstrel craze, appropriating black music for white audiences, creating american pop music. college professor and musician nathan edwards of madison, south dakota shines a light on this historical figure with crisp, contemporary folk arrangements of several of his more popular and lesser known compositions.


grab it for $10 on it's release date, july 16th, at nathan's bandcamp site. while you are there you can also check out his many previous releases form the past few years. before you go, here is nathan's cover of one of the most memorable and sweetest foster compositions, 'beautiful dreamer'.

laurence made me cry - houses (video)

here is an intimate video for welsh singer/songwriter laurence made me cry AKA jo whitby's excellent tune 'houses'.


laurence made me cry-houses from rhys davies on Vimeo.

video by rhys davies and furball films. if you are in great britian, look for jo out on tour in the near future. find out when here.
Labels: folk, international, live, live recording, performance, pop, singer/songwriter, video
Newer Posts Older Posts Home
Subscribe to: Posts (Atom)